What is good laser cutting 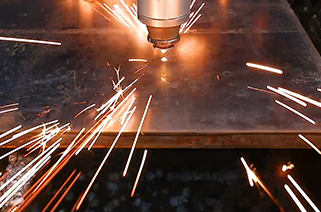 Cutting is one of the most well-known uses of lasers. As early as the 1970s, lasers were first used for cutting. The laser used at that time was a 200-500W CO2 laser. In the following decades, laser cutting was widely used in industrial production, and sheet metal is still the main object of laser cutting. When the object to be cut is a flat plate, a long part or a profile, laser cutting has obvious advantages over traditional methods. Not only sheet metal, the laser can also cut a variety of other materials, such as plastics, glass, ceramics, semiconductors and textiles, wood and paper. The application fields of laser fiber metal cutting machine are very wide, and the application objects are various. Not only for thick and large parts, fine machining and micro machining are also very popular. Experts believe that the application of fiber laser cutting machine jpt in these fields will achieve substantial growth in the next few years.

When the focused laser beam hits the workpiece, the irradiated area becomes so hot that the material melts or vaporizes. Once the laser beam penetrates the workpiece, the cutting process begins. The laser beam moves along the contour line while melting the material. A jet of air is usually used to blow the melt away from the incision, leaving a narrow gap between the cutting part and the plate frame. The narrow slit is almost no wider than the focused laser beam itself.

A measure of good cutting

There are many criteria for determining the quality of laser-cut edges. Standards such as burr form, dents, and lines can be judged with the naked eye. Others like verticality, roughness and cut width need to be measured with special instruments. The first step is to determine which standards are important for component characteristics. These standards are then carefully checked to optimize the cutting process. Which standards should be adopted. When to adopt? Some of the most important standards are listed below

The formation of burrs is a very important factor in determining the quality of laser cutting, because the removal of burrs requires additional work. Laser processing can form a variety of burrs, from easily removed debris to sharp metal burrs firmly attached to the bottom of the cut.

Depression and corrosion have an adverse effect on the surface of the cutting edge and affect the appearance. They appear in cutting errors that should normally be avoided.

If the cutting causes the component to heat rapidly, it will deform. This is particularly important in fine machining because the contours and connecting pieces here are usually only a few tenths of a millimeter wide. Controlling the laser power and using short laser pulses can reduce component heating and avoid deformation.